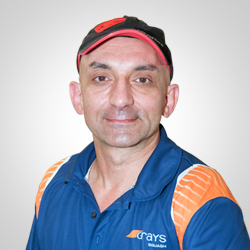 James Ethan’s story is inspirational to all would-be squash players.

#1 International Best Selling Author and highly ranked world-class squash player, James was by no means a ‘natural’ when he first tried the game. His first attempt at playing squash began at the age of 17, when his older brother took him down to the local squash courts for a game.

In those days (the late 80’s) the racquets were quite different to how they are today. The size of the head was smaller, and they were heavy and unwieldy because they were made of wood…like holding a sledgehammer!

All of which made the game that much harder to learn.

Especially for James. Typical of most new players, he found the game very demanding, and to be honest, he wasn’t very good at it. For that reason, no-one wanted to play with him.

From that very moment James became addicted to the sport. But the skill that he consistently demonstrates today certainly wasn’t evident back then.

Yet he loved playing, and was determined to master the game. Rather than giving up, he continued to practice until he began to improve. After several months of solid practice he was able to take on and even start beating the more experienced players at the club.

By the time he was 30, James was ranked # 250 in the world, which allowed him the opportunity to travel more to locations such as Melbourne and Queensland. He continued to win tournaments along the way and maintain his ranking status.

No Shows.
No Courses.
Got A Question